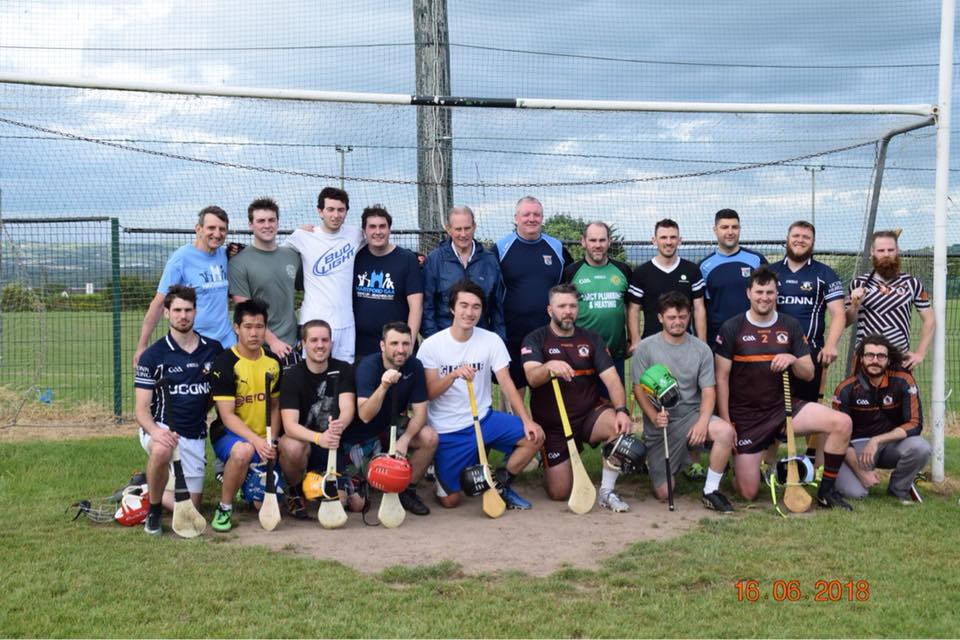 Back on June 13th, some of the Tacoma Hounds flew over to Ireland for an action-packed week-and-a-half of Hurling activity!

The trip started with a quick stop at the Masita headquarters in Kells, Co. Meath. The Masita staff were kind enough to give a quick tour through the facility, including their sublimation and cut and sew operations. It is one thing to open a just-arrived box of new kits, but another entirely to watch them get made right in front of you. We want to make sure we give a special “Thank You!” shout out to Masita for the tour and being a great kit supplier!

The Hounds next shot down to the Southwest Ireland, meeting up with the Hartford Kevin Barrys, some Worcester players, and some graduated UConn Hurlers in Carrigaline, Co. Cork. On Saturday, June 16th, all of the Hurlers were fortunate enough to take part in a practice run by Passage West and Cork’s own Justin McCarthy – who holds a list of Hurling achievements as both a player and manager going back to the 1960s. The training became the main subject of an Irish Examiner article covering part of the trip released just a few days later.

On Sunday, the Hounds and Kevin Barrys traveled – driven by the amazingly transportation-talented, bus-virtuoso Dee – to the historic and famous Semple Stadium to take in the Munster Semi-Final Match contested between the Cork and Waterford Senior Intercounty Teams, as well as the Minor match held just before and featuring the same counties. Despite Waterford holding a fairly steady lead throughout most of the match, Cork just edged it out in the final minutes with a late goal to win 1-23 to 1-20.

Monday night saw all of the American Hurlers present take part in their first match on Irish soil, competing against Passage West GAA. Following the match, the Passage West players stated that they would love to make the cross-Atlantic journey themselves and were impressed with the quality of play exhibited by the Americans, which became a consistent theme throughout the week. Despite this, many players believed they had more in the tank and were capable of setting a higher standard – igniting a fierce determination heading into the remaining 2 matches. This determination was evident in the players flying out of the gate and holding the lead at halftime during the second match against Mungret-St. Pauls of Monteen, Co. Limerick, before falling to the home side’s second-half resurgence. The final match against Smith O’Briens of Killaloe, Co. Clare saw Hartford’s Dick Edmonds experience a homecoming match and getting to run out one more time in a red and yellow jersey.

A clear-cut highlight of the trip was getting to visit Torpey Hurleys of Sixmilebridge, Co. Clare. Sean Torpey put on a wonderful presentation, going over the care and attention that goes into a Torpey stick such as examining the grain, the lengthy drying process, and determining the right piece of ash for each player. He also covered some of Torpey’s admirable efforts put toward sustainable hurley production and ash farming before giving a quick demonstration of the finishing process that produces a fine stick. For many, the visit provided the first opportunity to purchase a hurley in-person and, as with the rest of the trip, is sure to be an experience they’ll never forget.

The Tacoma Gaelic Athletic Co-op intends to make regular return trips every few years to continue demonstrating the hard work and player development that happens week-in, week-out in the US, bringing back as many “W’s” as we can fit in our carry-ons.