Well, folks, Week 2 under those Wednesday night lights was not left wanting for action. In a continuation of last week’s intense see-sawing showdown, the Panthers and the Lumberjacks combined for over a point per minute through tonight’s tight Indoor Hurling match. The match took off with a frenzy as both teams successfully made a number of runs through the middle to capitalize on each other’s backtracking defenses.  Despite the strikes peppering the goalmouths, neither team was able to gather a substantial lead in the flurry of open play that marked the game’s early minutes. 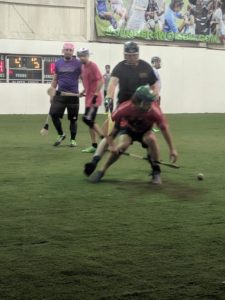 Settling into an ebb and flow the match would see throughout, bursts of downfield attacking movement were interspersed with frequent long-range attempts. Duels of advanced one on one battles supplied by passing from deep showcased the same successful series: snag, shake, shoot, score or save. Taking “if it ain’t broke, don’t fix it” to heart, defenders found themselves regularly trailing opponents’ lateral runs across the final third, punctuated by shots on goal from around the top of the box.

Opposing attacking midfielders Sean and Clint regularly rattled the black nets with the offensive tactic, putting up the two highest scores by individual players yet in their phenomenal midfield matchup. Regular deep scoring threats supported the attacking efforts, forcing the keepers to stay closer to net throughout the match and providing brief seconds of respite from Indoor’s frenetic pace. A high scoring first period saw the teams very even at its close, the Panthers holding an 11 to 9 lead going into the first intermission.

The second period saw the defensive peak of a match-defining performance by the Lumberjacks’ keeper Kevin, who obliterated last week’s high of 11 saves with a new league record of 27 on the night. The Panther’s goalie tandem of Ciaran and Aaron on the other end of the pitch made up a different type of offensive/defensive blend – the former making 8 stops of his own while the latter racked up 10 goals, many of which from within his own box. Only two matches down, we are already seeing a bit of a trend with deep shots and Keepers who can score themselves in vogue this inaugural season. Concluding with more physical play towards the end of the second period, both teams demonstrated a refusal to let the other rest easy on their way into the final 15 minutes.

In a match that never seemed to stray beyond a 5 point gap between either side, the third period provided plenty of suspense for the crowd in attendance. The Panthers had just begun their attempt to slip away and put the game to bed before smart play through a series of two minor penalties and a couple of goals from deep kept the Lumberjacks right there in the contest. With about 5 minutes gone, the Panthers had a player sent to the box for a high elbow before another joined them mid-penalty kill for an accidental tripping with the stick.

The Lumberjacks notched three scores to capitalize on the two-man advantage, freeing the first Panthers’ player back from the sideline. Back up to 3 on the turf, Leon managed to grab a shorthanded goal while the Lumberjacks made their penultimate press in the penalty’s dying seconds. Back at even strength, a quick pair of snipes by Kris and a charging corner run from Kevin prevented Leon’s emerging scoring threat and Aaron’s late-game foot save from becoming the final chop of the ax. In a match settled by secondary scoring and still-impressive keeper displays, the Lumberjacks and Panther’s top offensive pairs both buried 23 scores a-piece in a high-firing, 29-27 contest that truly went to the wire.