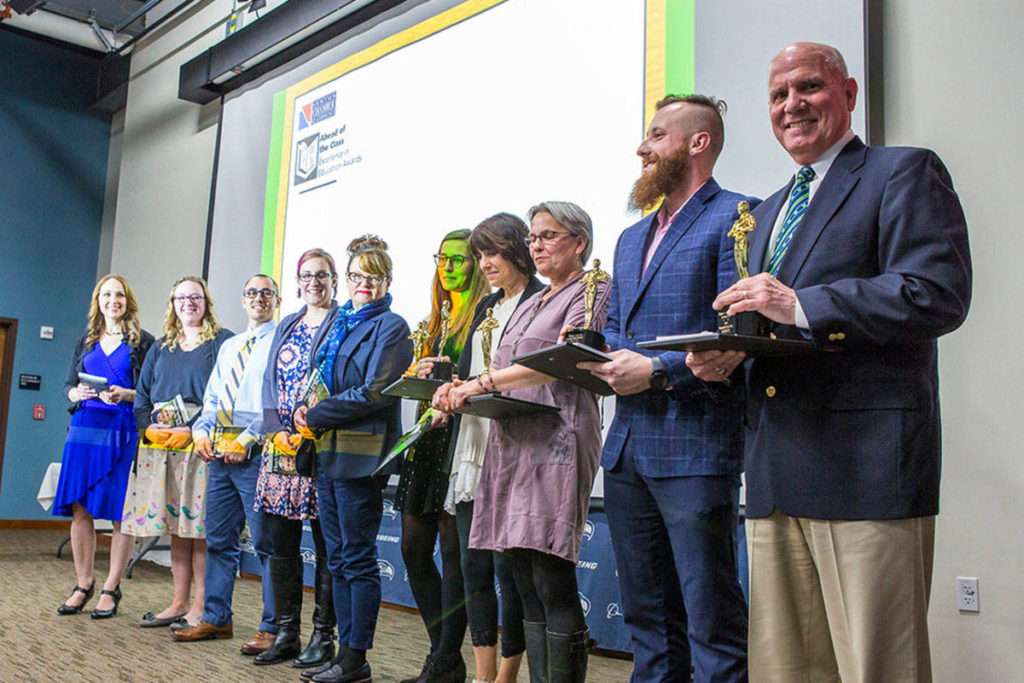 One of the Co-op’s members, Sean Davis, was honored as a Finalist at the 17th Annual Ahead of the Class award ceremony on April 2nd 2018. 10 teachers from the Renton School District were nominated for the awards, 5 of whom were chosen as winners. The Ahead of the Class award program was founded by the Renton Chamber of Commerce, Renton schools, and Renton businesses to enhance community awareness of the excellence of education in Renton.

Every year, the multi-stage award process begins with an open nomination of teachers from Renton schools. Nominees are then invited to submit applications. The Finalists receive their official invite to the awards ceremony during a surprise visit from local officials and Blitz, the Seattle Seahawk’s mascot. Last year’s award saw 201 nominations narrowed down to 47 teachers invited to submit applications. A committee of local volunteers selected Sean for his work at Albert Talley High School along with the 9 other 2018 Finalists.

The award ceremony was conducted at the Virginia Mason Athletic Center (VMAC) in Renton, WA. VMAC has been the headquarters and practice facility for the Seattle Seahawks since their move to the location in 2008. It is the second-largest facility in the NFL. As Sean is a hardcore and life-long Seahawks fan – just mention it and he’s quick to show off the weathered tattoo of the old and current logo across his back – we’re sure he was thrilled with the tour he was able to take of the training facilities. Hopefully, he was able to scout out some ideas to bring back to the Co-op’s training!

While Sean was unfortunately not picked as a Top-5 winner, we commend him for his impact at Albert Talley High School and reaching the award’s final round. Sean’s work is a reflection of the Co-op’s community-minded values and our motto of “Always Grateful, Never Satisfied.” It is phenomenal to watch him bring that effort every day to his school as well as to help continue to grow the Co-op.