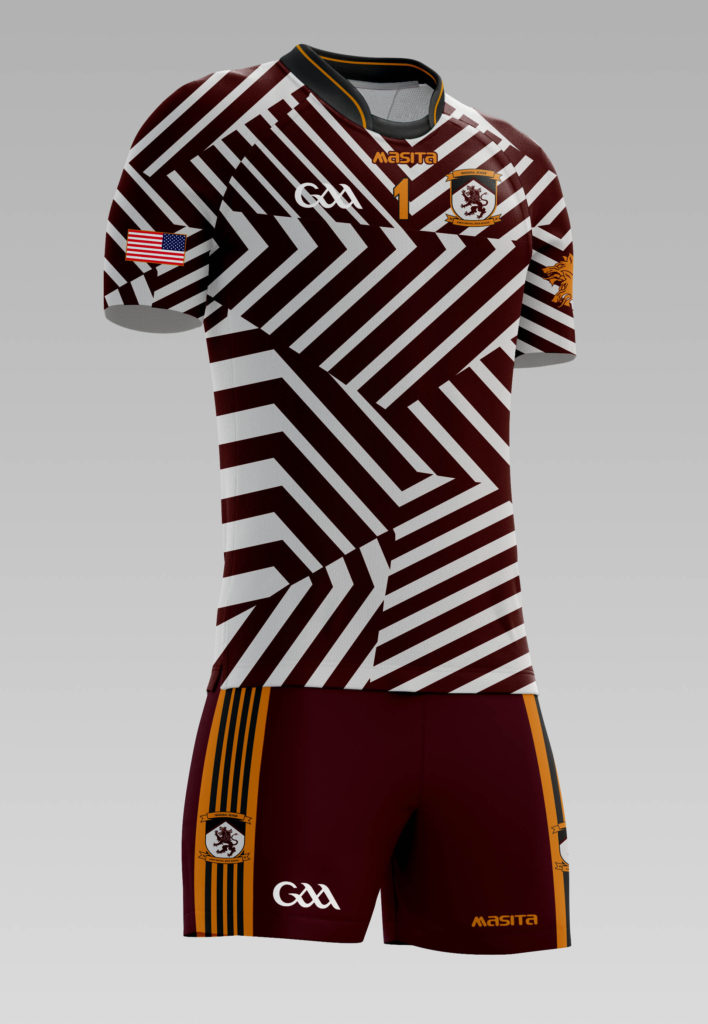 The Tacoma Hounds are excited to reveal one of the most unique kits ever to grace the world of Hurling – the Dazzle Kit!

Inspired by Dazzle Camouflage, the jersey features the Co-op’s colors of oxblood and light grey, organized in a mismatched stripe pattern unlike anything seen on a pitch before. The bold design has already been turning heads, particularly when worn by some of the Tacoma Hounds during their June travels across Ireland’s Southwest. As with the Home jersey, the right and left sleeves feature an always-facing-forward American flag and the three heads of the Cerberus, respectively. This year’s jersey also features the Inaugural Season version of the club crest.  The Dazzle jersey will be worn with the Co-op’s standard shorts and socks to complete the full kit.

Also known as “razzle dazzle” or “dazzle painting,” the complex patterns were primarily used by the United States and the UK during World War I and World War II on naval vessels. The exact origins of the pattern are somewhat up for debate – with a zoologist, a marine artist, and even Picasso and the Cubist artists all laying claim to its ownership in various capacities. Artist Edward Wadsworth oversaw the painting of over 2,000 ships with Dazzle camouflage by the end of World War I. No two vessels were painted with the same dazzle pattern, further contributing to the uniqueness of the design.

The Tacoma Hounds will soon be announcing their club shop on the Masita website. All of the Co-op’s official Masita gear is expected to be available for purchase – including the Home and  Dazzle Kit along with a lighter colored training top featuring the Cerberus design as a watermark. Masita just became the USGAA’s new official partner for club gear earlier this spring. Be sure to check out the designs and creativity exhibited in the jerseys and leisurewear they have been making for clubs.